Founded 1981 - Promoting the Expiation of Stigmatic Guilt through the Promulgation of Universal Joy!

This event was very much about covering the issues that are potentially impacting LGBTQI+ communities today, when put in a context of experiences of discrimination at school or work, LGBTQI+ people face threats to their safety and wellbeing every day in the name of religion.

Extremist Christian lobby groups are pouring resources into campaigns to stigmatise and marginalise our communities, particularly transgender people. The holding of this event was a timely one considering the religious freedom bill being tabled by Mark Latham in the NSW State government and the further developments taking place in the Freedom of Religion Bill in the Federal government.

In attendance at the forum from the OPI were Sr Rowena Keeper of the Holy Doyley, Sr Eileen Dover of the Double Cross, and Nv Sr Helena Anne Basquet. The forum ran from 1:00 pm to and concluded at approximately 2:30 pm.

Panel members were Fran Kelly an ABC presenter who was the facilitator, Karen Pack an out Lesbian who was fired from her job at a Christian college, Ghassan Kassisieh the Legal Director at Equality Australia, The Reverend Dr Josephine Inkpin the first openly and fully recognised transgender Anglican priest in Australia. Dr Kerryn Phelps was replaced at the last minute (due a Covid19 related inability to attend) by Hussein Hawli, an Australian gay man of Lebanese background speaking about his Muslim faith.

The keynote speakers shared some of their personal stories with the audience. Some details in their stories were quite confronting and this led on to further discussion about to how to respond to some of the developing challenges and thoughts on strategies. Towards the end of the forum, it was opened to unscripted questions by the attending gathered faithful of which there were many. Unfortunately the time allocated for the forum was unable to accommodate all the gathered faithful who had questions to pose.

By the time the forum had concluded Sisters had developed a fearful hunger and collectively were in need of some sustenance, and our nutritional needs were met by the consumption of some warm tasty noodles being served by a ”hole in the wall’’ style restaurant around the corner from the Metro Theatre.

Sisters then safely wended their way back to their respective convents at the conclusion of the meal. 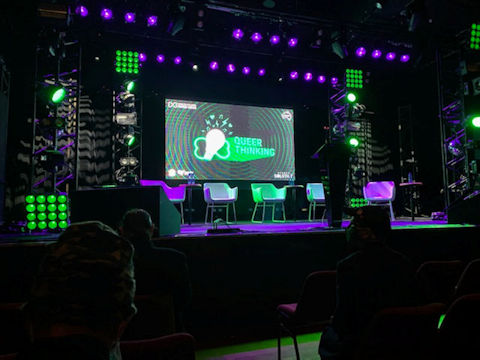 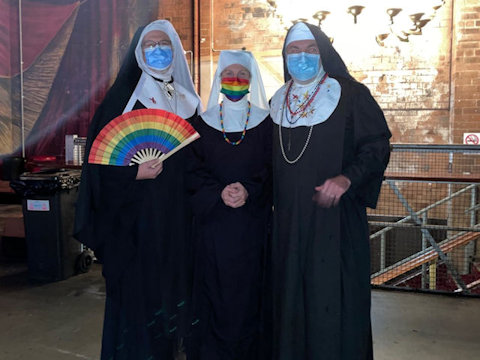